Workplace design is known to have a significant effect on productivity and not having enough variety of space to work in can impact on employee satisfaction and performance. We took a closer look at this trend of dissatisfaction with workplace design and asked 500 members of the public what they thought would improve productivity levels at work when it came to office design:

You can view a breakdown of the survey data here: 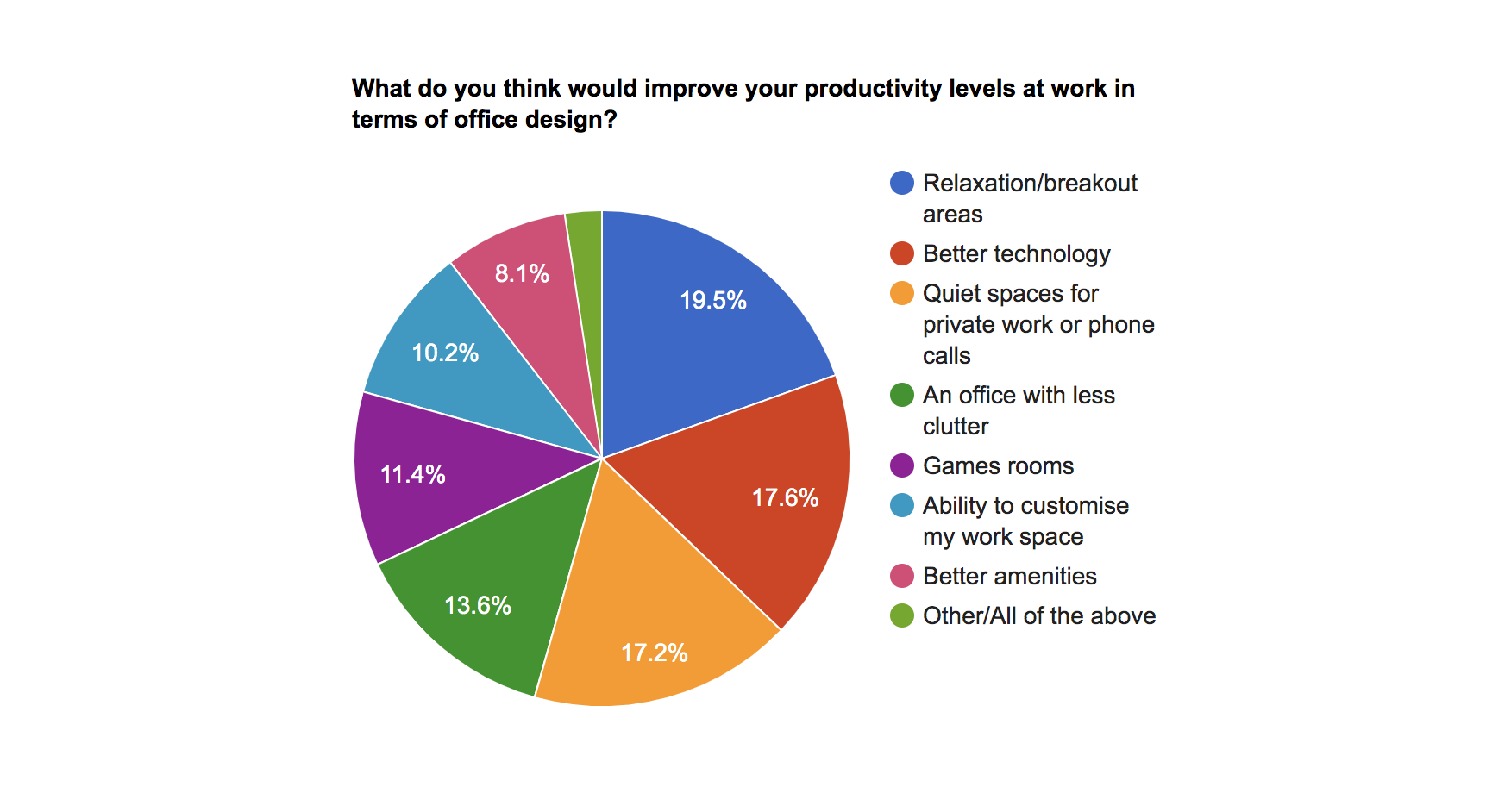 Below, we take a detailed look at the key points from the survey.

Relaxation and breakout spaces most important for productivity

Our research showed that one in five people believe that having more spaces to relax in or work away from their desks would improve their productivity at work. The positive effects this simple change could have on your business are as follows:

Employees are now demanding more agile workspaces, in part because of improvements in technology, mobile working, more flexible working hours and the influence of creative office design from the likes of Google and Facebook. This shift from formal workspaces to more agile, collaborative spaces is becoming the norm. Employees (or prospective employees) are likely to be used to working everywhere from coffee shops to bars, and therefore expect more variety in the workplace than being restricted to a traditional desk and chair.

An investment, not a cost 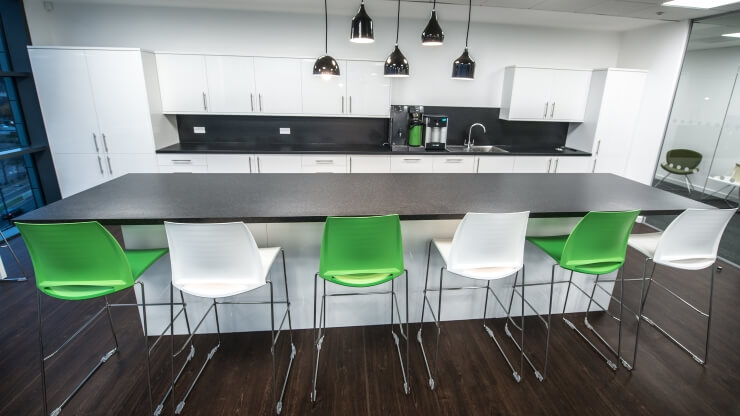 Global media production and management services company ZOO Digital wanted to update their headquarters with a view to improving effectiveness and communication. As part of the redesign for ZOO Digital’s offices, we included collaborative and ad-hoc meeting places with integrated technology to increase engagement across the company. 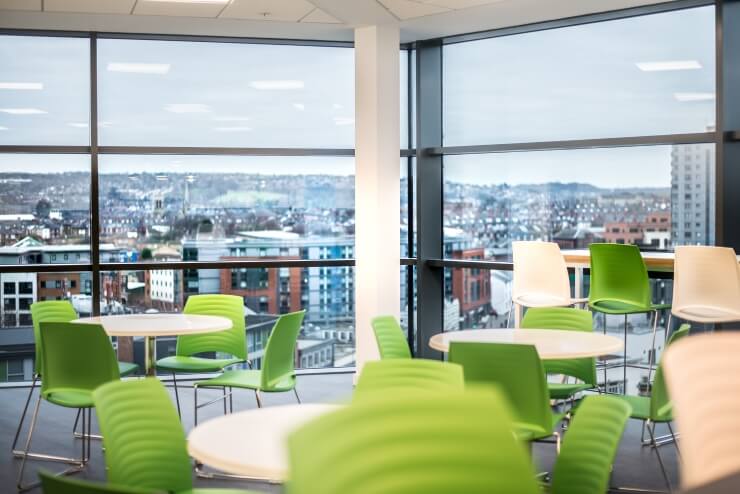 For this less prescriptive work-setting to be a success, certain things need to be in place and this brings us to the second highest result in our survey. 17.5% of people surveyed said that better technology would improve their productivity in the workplace. This technology could range from simple solutions like more power sockets and faster Wi-Fi, to wireless charging and access to collaboration software or hardware, such as large touchscreen tablets. Interestingly, 21.6% of participants who chose this option were in the 55-64 age group, so improving technology in the workplace should not just been seen as something that will appeal to or attract younger talent. Only 15% of the 25 – 34 year old age group ranked access to improved technology as important, which could suggest that this age group is more aware of and more equipped for agile working. As you can see from the data below, 21.6% of 55-64 year olds surveyed believed that better technology would improve their productivity at work: 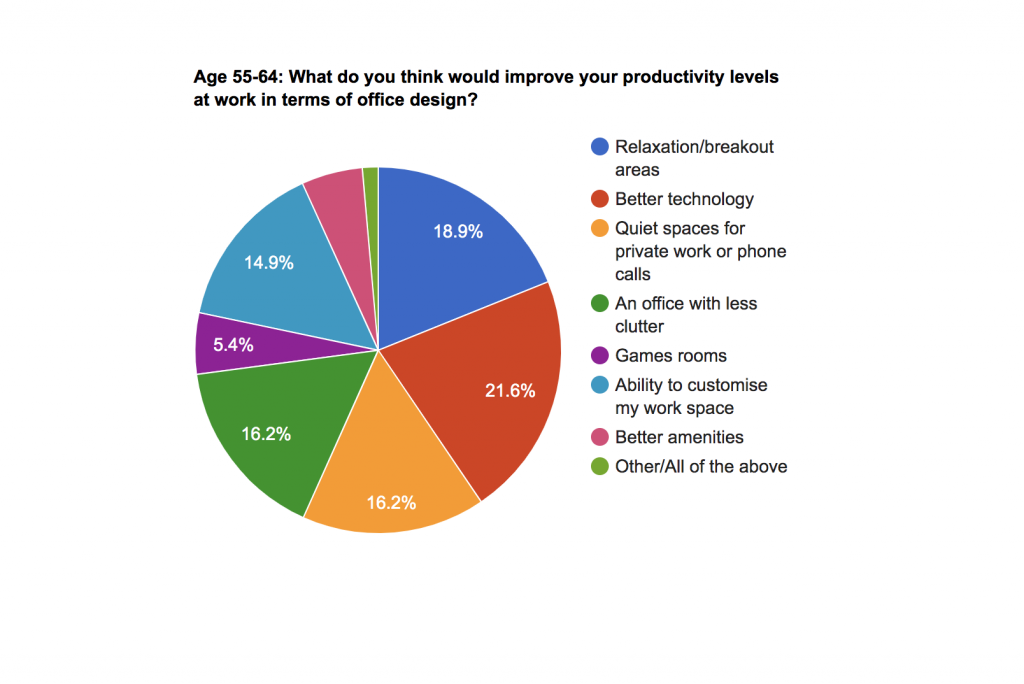 This was in contrast to participants in the 25-34 age group, where only 15% thought better technology would benefit productivity: 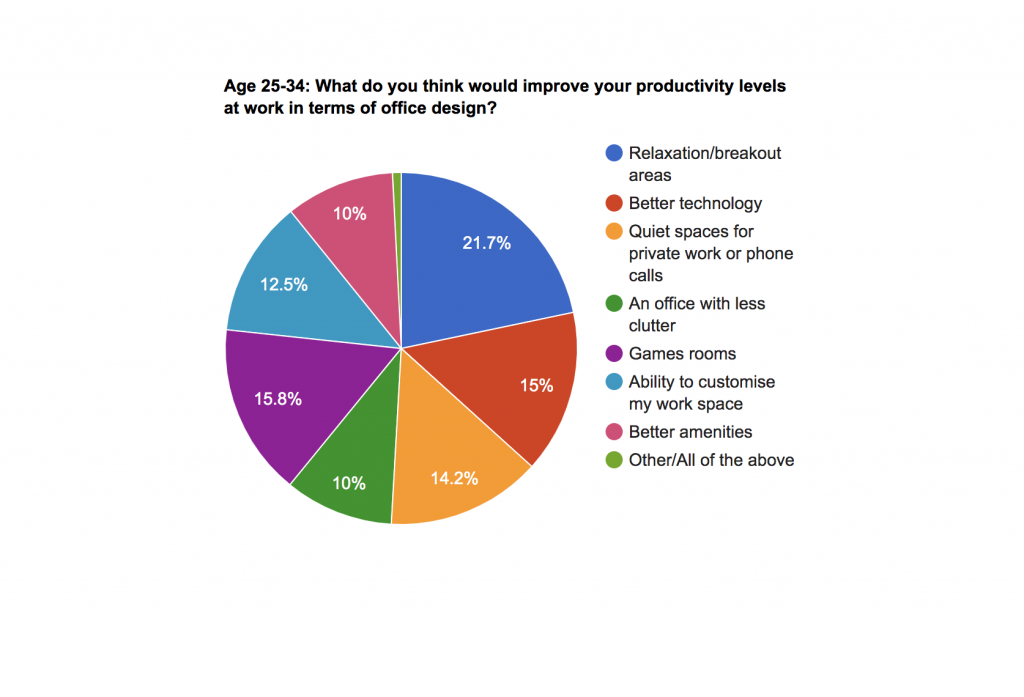 Clearing the clutter
13.5% of people surveyed said that less clutter, such as excessive wires and papers around the office, would improve their productivity. Interestingly, one survey showed that the number one turn off for potential clients or prospective employees entering a company’s workspace was clutter, so it’s not just current employees that are affected by a messy office. If you opt for a more open plan office design, with dedicated areas for relaxing and collaborative working, then dealing with excessive wires and mess is something that needs to be considered. Cultivating a wire-free workplace driven by flexible-technology might seem daunting but from a financial point of view, the benefits could be huge. As well as increasing productivity, ridding your office of wires means a reduction in individually wired work stations, which can decrease power and cooling costs and provide a healthy return on investment.

Getting the basics right goes beyond technology; it also incorporates amenities that are used every day by staff, but which many people might not give much thought to how they impact on productivity. 8.7% of people surveyed said that better amenities such as toilets, showers and kitchen facilities would improve their productivity at work. This might seem like a small issue when compared to installing cutting-edge technology and introducing agile working but in our experience, getting these basics right can make a huge difference. When we were asked to re-design the offices of the UK’s biggest outdoor store, Go Outdoors, one of the company’s key issues was unsatisfactory amenities. Impractical showers, worn-out WCs and a dull canteen were all having an impact on employee satisfaction and therefore productivity. Updating these and bringing them in line with the company’s brand might seem like a simple thing to do but it had a huge impact how valued Go Outdoors’ staff felt.

Games rooms are a relatively new addition to workplace design but they shouldn’t be seen as a gimmick. As this article in Entrepreneur states: “Instead of encouraging people to work through the weekend, perhaps we could have a happier, more productive workforce by encouraging them to have fun in the office during the week. The result might well be a happier, more productive workforce — and business growth.” Games rooms can offer a retreat for employees to relax and unwind in, as well as collaborating on ideas over a game of pool or ping-pong. Not all age groups see the benefits of such a space though, just 5.4% of participants in the 55-64 age group thought that introducing a games room to the office would improve productivity. This is in stark contrast to people in the 25-34 age group, where around three times as many people thought including a games room at work would have a positive impact on productivity. Other age groups appreciate the benefits of a games room are 35-44 year olds as 13% believe that having a games room at work would improve productivity and 14% of 18-24 year olds agreed. Only 5.4% of 55-64 year olds surveyed thought a games room would increase their productivity in the office: 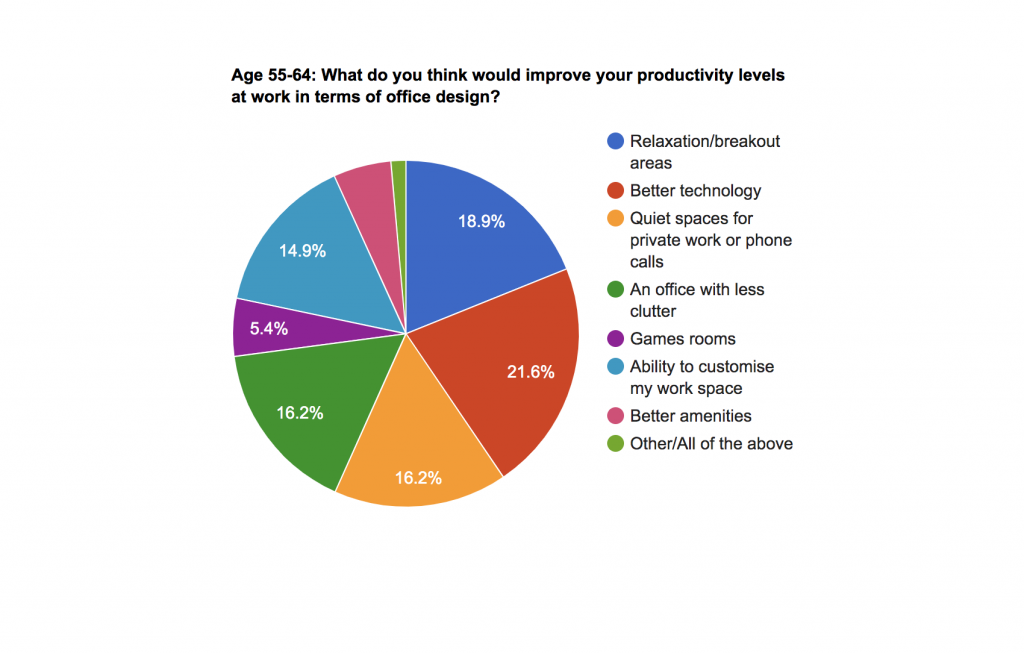 Over three times as many 25-34 years olds thought a games room would impact positively on productivity: 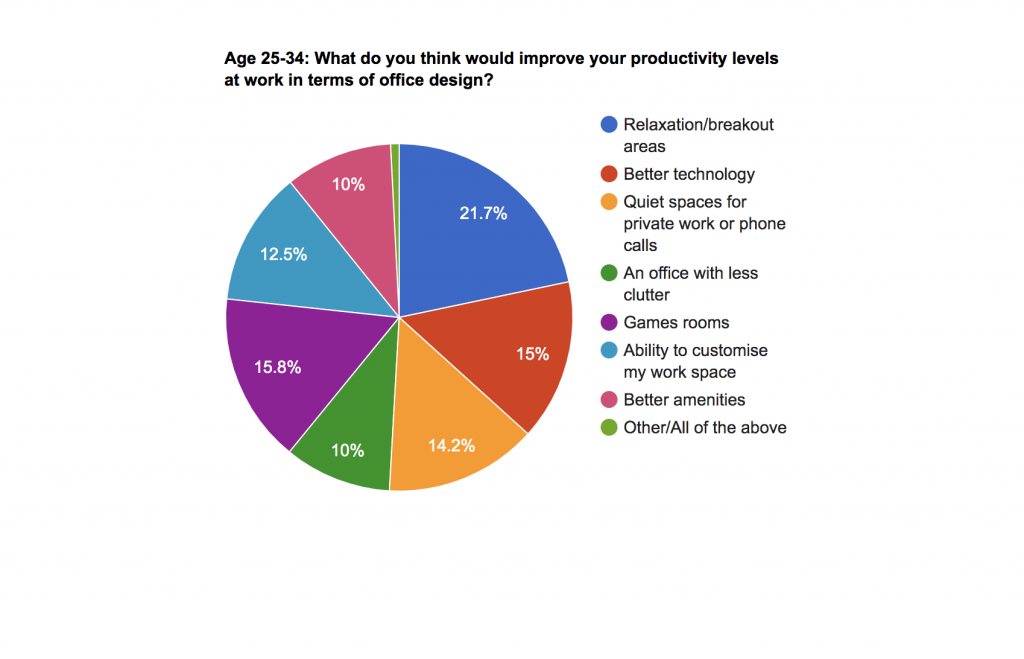 The need for quiet

It shouldn’t be assumed that a fully open plan design is the solution to a more productive office, as although breakout areas came out on top in the survey, quiet spaces for work that requires concentration or privacy (such as for making phone calls) came in third place with 17.1%.

20.7% of 45-54 year olds surveyed believe that quiet spaces will increase their productivity at work, this could be because this generation is more used to traditional workspaces, where private offices and closed meeting rooms are the norm. This age group also voted the ‘ability to customise my workspace’ highly with 14.9% believing that would help productivity. Again, a highly personalised workspace (with plants, pictures and in-trays for example) is a very traditional approach to office design and one that may have had its day with the increase of workspace flexibility.

There are numerous studies that show fully open plan office design doesn’t necessarily work, so there needs to be a balance between traditional partitioned or private offices and open plan, collaborative office design.

45-54 year olds voted quiet spaces as the most important thing to improve productivity in the office, with 20.7% choosing this: 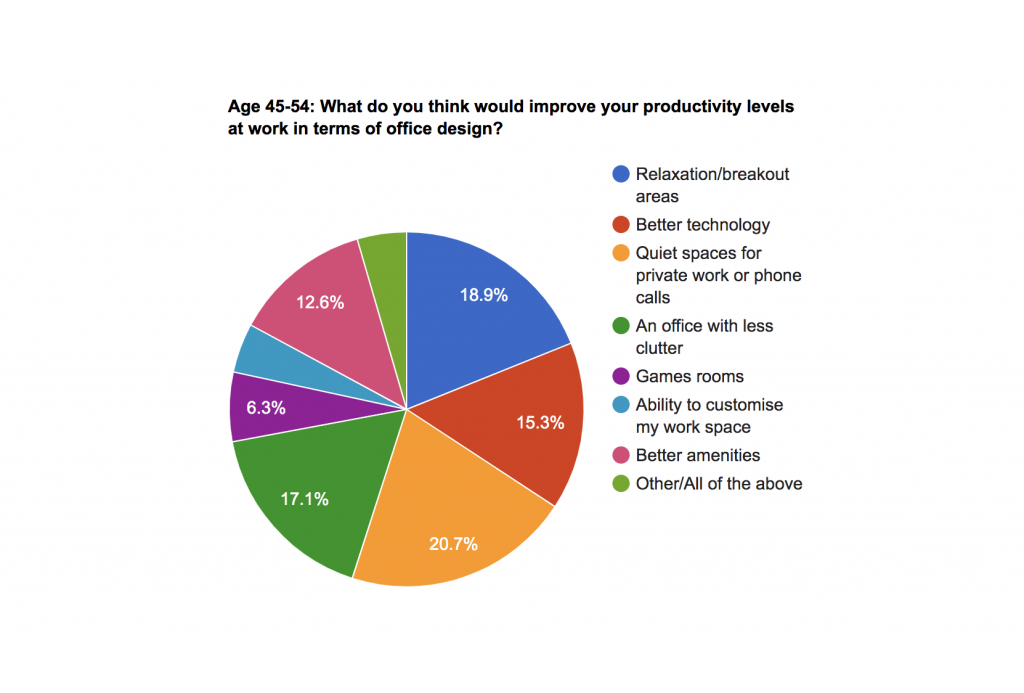 Getting the balance right
There is certainly a need for quiet and private space at work as distractions in the workplace can have a dire effect on productivity. We get interrupted on average every 11 minutes and if we’re deeply absorbed in a task, it can take as much as 23 minutes to fully regain concentration after an interruption. In YouGov’s 2016 What Workers Want survey, 71% of the 1,132 respondents cited a quiet space to work as important, but only 30% were satisfied with the current level of quiet space available in their office. Donna Flynn, anthropologist and director of Steelcase’s Workspace Futures group comments on the need for balance, “A lot of businesses are now struggling with the balance of private and open spaces. There’s mounting evidence that the lack of privacy is causing people to feel overexposed in today’s workplaces and is threatening people’s engagement and their cognitive, emotional and even physical wellbeing. Companies are asking questions like, ‘Have we gone too far toward open plan… or not done it right? What’s the formula? What kind of a workplace should we be creating?’” Steve Lang, director of Savills Research, offers some solutions to these questions and believes that the key is to offer variety and choice to employees, “There is never going to be a perfect office, but organisations must create as much choice as possible to enable employees to vary noise levels to meet their needs depending on what they’re working on. There should also be a desk-based solution for minimising noise levels at certain times, beyond simply donning the ubiquitous white headphones.”

In our experience, the shift from formal, defined workstations to a more agile workspace involves a mix of zoned areas, including those designed for collaboration, that are supported with appropriate technology and communication tools. Combining these areas with booths and quiet spaces that facilitate individual work or private meetings can create a happier, more productive workspace. When done correctly, office design can do much more than increase productivity in the workplace, it can help to strengthen your company brand, improve employee wellbeing and retain and attract staff members. If you want to upgrade your office space to ensure your team are as happy and productive as possible, contact the design experts at Dale Office Interiors on 0114 233 1115 or contact us here. Feel inspired by the above? Just click on the buttons below to share it: 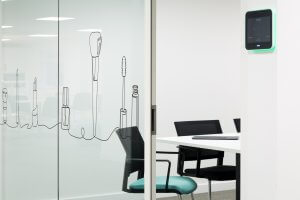 How Office Partitions Can Help You Conquer Privacy Problems at Work

Find out why office partitions are the answer to creating functional private spaces within the office. 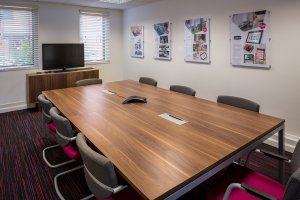 Art in the workplace: a nicety or a necessity?

Many organisations don’t budget for art in their commercial interiors projects. Yet some feel “art is a critical component – on par with light, air, ergonomics and quiet spaces” in a well considered office design. We think the tide is turning and more businesses are starting to feel that art is a necessity for their workspace. 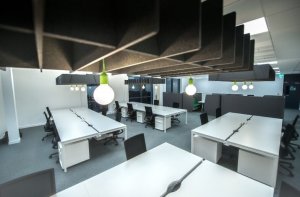 Pros and Cons of Open-plan Offices

Explore the pros and cons of open-plan offices and how the right design can make them productive places to work. 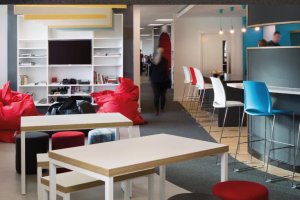 Research suggests that having chill-out spaces in the office will attract young talent.

"The team at Dale were incredibly
efficient, friendly and helpful, and
we couldn’t recommend them more
highly.”
Gavin Whiley
Managing Director at Havwoods Designer
"Our new office will help us grow our
business further, attract Bradford’s
top talent and enhance our team’s
wellbeing"
Victoria Davey
Gordons Partner and Head of Operations